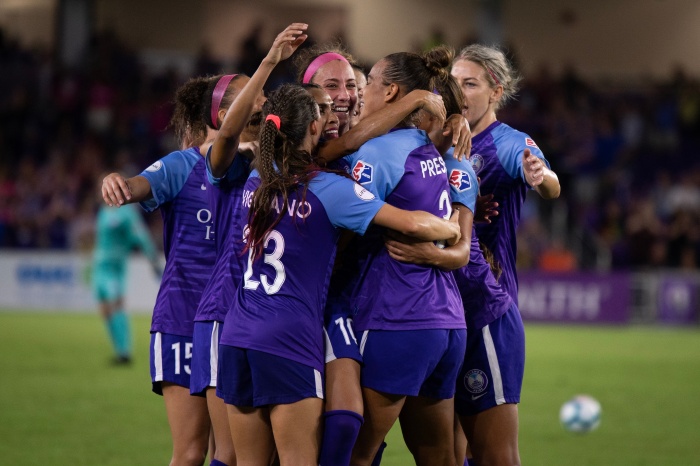 The Orlando Pride and Reign FC finished out the 2019 NWSL regular season with a 2-2 draw on Saturday night in front of an announced attendance of 6,554 at Exploria Stadium.

“I’m really proud of them tonight,” Orlando Pride head coach Marc Skinner said after the game, “We were woeful against Washington and tonight we were aggressive, we fought, we conceded two goals, which we’re not happy with of course, but I felt for the first time, the stats represented what I felt the game was like.”

The Pride started the game on the front foot, creating five shots on goal in the first 20 minutes while holding the Reign to none. Camila led the team with three of those five shots in that time frame.

The home side eventually opened the scoring in the 24th minute, when Marisa Viggiano played a ball for Claire Emslie, who fed a perfect ball into Rachel Hill, who calmly rounded Reign FC keeper Casey Murphy and slotted it in the net to put the Pride up early on.

The visiting team equalized 10 minutes later after a clearance from Ashlyn Harris fell right to former Pride fullback Steph Catley, who crossed it into the box for Darian Jenkins to head into the goal.

Reign FC took the lead just before the half, when Jodie Taylor beat the defensive line and scored from just inside the box, beating Harris to her right.

In stoppage time, forward Claire Emslie was forced to come out of the game due to injury, burning a substitute right before the players headed to the locker room.

The second half showed more fight from the home side. The team dominated on the stat sheet, registering the most shots they’ve taken all season, including shots on target. Marta and Hill both put 15 shots combined against Casey Murphy, but until the 86th minute, the score remained 2-1 in favor of the visitors.

The 72nd minute marked the return of Toni Pressley to the field, her first game since July 20th against Sky Blue FC. Her return seemed to spark the team and give them renewed energy as they approached the final minutes of the game.

The Pride managed to find the late equalizer they had been searching for and it came from a corner kick with just four minutes left in regulation. Camila took an in-swinging corner that popped out of the box and onto the foot of Marta, who perfectly volleyed the ball low and past Murphy to draw the game level.

A thing of beauty from Marta 😍

Orlando finishes the season with a record 4-17-3 with 15 points in the NWSL standings.

How the Pride lined up